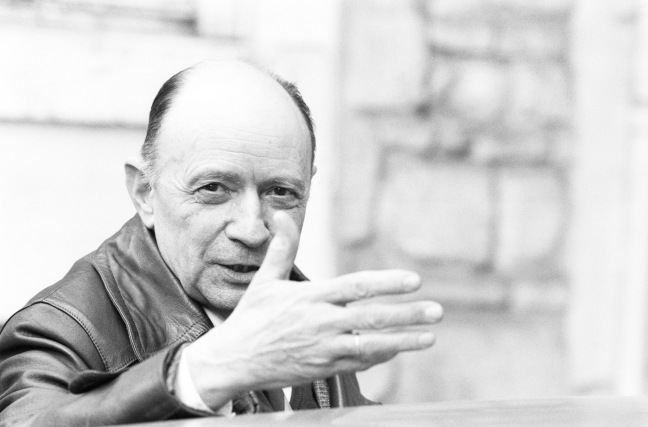 Almost seventy years ago a French philosopher and theologian wrote a book that is more relevant today than when he wrote it. Writing less than ten years after the catastrophe of World War II, Jacques Ellul sounded the alarm about what he called the Technological Society.

Ellul argues that modern life is increasingly governed by what he called “technique.” Technique isn’t the same thing as technology. Technology is merely a byproduct of a worldview that places supreme value on efficiency, productivity, and control. As a worldview, the power of technique is that it becomes a set of uncritical, unthinking assumptions that a society adopts.

The modern factory is a temple of technique. The factory is designed with efficiency, productivity, and control as its central values. Human beings are invited to work at the factory as long as they accept the assumptions of the factory. Workers are just a part of the overall mechanical system. Indeed, it is only a matter of time until the human beings are replaced either with cheaper parts through outsourcing or with mechanical, robotic parts through automation. Technique must be accommodated no matter the human cost.

Another example of technique mentioned by several writers is the quantifying of non-quantifiable attributes like personality or intelligence. Standardized testing, personality inventories, IQ tests are all manifestations of technique. They apply a mechanistic assumption to the human condition. How, after all, can you prove your intelligence without a standardized test score? How, after all, can you have any idea how to understand your neighbor (or yourself) without the help of a personality test?

One final example is from the world of baseball. Sports have been overtaken by a statistical revolution. Decisions on which player to draft, what play to run, what free agent to sign have been handed over to computers. No sport has been more hit by this than baseball. Advanced metrics can be useful tools, but they have also reduced the game to little more than a predictable mathematical equation. This, and only this, approach is called “smart.”

Technique worships nothing, respects nothing. It has a single role: to strip off externals, to bring everything to light, and by rational use to transform everything into means. More than science, which limits itself to explaining the “how,” technique desacralizes because it demonstrates (by evidence and not by reason, through use and not through books) that mystery does not exist…Technique denies mystery a priori. The mysterious is merely that which has not yet been technicized.

The power and autonomy of technique are so well secured that it, in its turn, has become the judge of what is moral, the creator of a new morality. Thus, it plays the role of creator of a new civilization as well.

As the sacred is stripped away from life in general, we come to turn our technology into the only sacred thing worth celebrating and even (if we still may use such language) worshiping.

The individual who lives in the technical milieu knows very well that there is nothing spiritual anywhere. But man cannot live without the sacred. He therefore transfers his sense of the sacred to the very thing which has destroyed its former object: to technique itself.

I’ve been wondering lately what Ellul would have thought about the times we are living in. What does a pandemic in the technocracy look like?

Well, on the one hand, I’m sure that Ellul would have advocated for responsible measures to save as much life as possible. He was, after all, a Christian theologian for whom life was inherently sacred.

On the other hand, I imagine that Ellul would have been concerned about the ways that technique is dominating our response. He probably would write a blog about it and get blasted by people who didn’t really understand the point that he was trying to make. Maybe I’m just projecting.

Technique is capable of protecting human life, but it is not very good at protecting the human person. Technique can protect us (to a degree) from infecting each other, but that is where the ambitions of technique begin and end. There is more to being a human person than survival. The texture of life is made of many great and small things that we are missing right now. The hug of a friend or a grandchild. The roar of the crowd. The sound of the Church lifting her voice in unison. The joy of physical exertion. In some states, you can’t go fishing. You can’t go on a walk through a park. In some places you can’t even watch the sunset from your parked car. Many of the people you meet when you go to the store have a zombie-like posture about them. Are we allowed to talk? To laugh? To shake hands? Heaven forbid. I shook a guy’s hand the other day and immediately felt as if I had violated the law.

The texture of life feels like it has been smoothed away. But we are surviving. I guess.  I’ve been thinking a lot about my father and mother-in-law. My MIL had to go into assisted living mere days before this pandemic hit. She suffers from dementia caused by a stroke. My FIL is near 80 and is not allowed to visit her or even see her through a window out of fear that it would confuse her. (They changed this policy recently.) It’s killing him. Because of her condition, we are losing a little bit of her with every passing day, and Illinois is in no hurry to make changes anytime soon. But she is surviving. I guess.

Watching television the last couple of weeks, I’ve noticed that most of the commercials have transitioned to being COVID themed. There’s a trend in these commercials to show how people are coping in creative ways with being locked-down. Usually, technology is in the background nodding approval. Look at how people are remaining connected on Zoom! Look at these funny TikTok videos people are making! Look at the adorable couple getting married by a pastor on a video screen! I have mixed feelings. Just like everyone else, I’m moved even to the point of tears when I see these stories. But there is also a part of me that is repulsed. It’s like the old men in the Old Testament who wept when they saw the new Temple because they remembered the glory of the old Temple. Technology only allows for a certain amount of the texture that makes life worth living. It can only allow half-measures and synthetic approximations. Call me a grump if you must, but I’m having a hard time celebrating the gifts of technology. I’m thankful for technology, but I also know that the response to this pandemic would likely be very different if the technology didn’t exist to offer a certain amount of pacification to the public.

These things are not popular to say among some people. They assume I’m taking the side of the “open-it-now” crowd. I’m not. They assume I’m being seduced by “virus hoax” conspiracy theories. I’m not. I promise. Others might protest that I even bring these things up. “Relax! Everyone knows that these are necessary, but temporary measures.” That is obviously true. (I put that in italics just in case you are at risk of misunderstanding me.) I’m of course not assuming that anyone is happy to be in lock-down. I’m also encouraged by signs that certain lock-down measures may soon be relaxed.

I can’t help but point out, however, that the infrastructure of the technocracy is being laid out in the way that we respond to this moment. Already you hear a growing chorus of voices proclaiming that technology will determine when we are allowed to start living our lives again. We “need” a vaccine. We “need” contact tracing on our cell phones to track our movements. We “need” instant testing or even immunity passports as a prerequisite for any travel. Ellul said, “The autonomy of technique forbids the man of today to choose his destiny.” We will do only that which technology and technological solutions will allow. Never mind the fact that human civilizations have survived and flourished for some time without these particular technological interventions. There is no escaping the technological imperative. The imperative is so strong, that some of you read the previous paragraph in disbelief. “How can you possibly be against these types of technological gifts?” It’s a fair question. I’m not against them all necessarily. For instance, I would love for a vaccine to exist. But just be mindful. Technique always demands more than what it gives.

Another French philosopher, Jacques Maritain sounded this warning as World War II was starting to wind down. It is a warning that we would do well not to avoid today.

Technology is good, as a means for the human spirit and for human ends. But technocracy, that is to say, technology so understood and so worshiped as to exclude any superior wisdom and any other understanding than that of calculable phenomena, leaves in human life nothing but relationships of force, or at best those of pleasure, and necessarily ends up in a philosophy of domination. A technocratic society is but a totalitarian one.

3 thoughts on “pandemic in the technocracy”