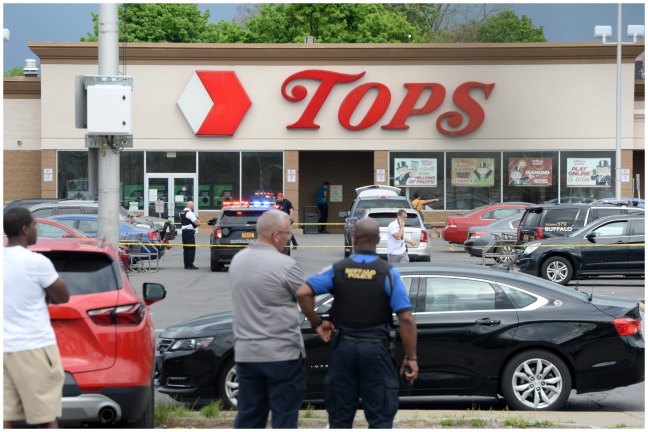 See to it that no one takes you captive through hollow and deceptive philosophy, which depends on human tradition and the elemental spiritual forces of this world rather than on Christ.

This weekend we were saddened (but sadly not surprised) by news of yet another mass shooting.* An 18 year old man walked into a grocery story in Buffalo, New York and murdered 10 people with intentions of murdering many more. As if mass murder weren’t evil enough, it has become known that the shooter, a white man, was motivated by a deep, dark racism. In a 180-page manifesto, the shooter articulated his all-consuming hatred of minority groups especially Jews and African Americans. His rampage seems to have targeted black people specifically.

As is often the case, this act of evil must be interpreted through a pre-ordained political grid. We rush to associate heinous acts of evil with our political opponents in the desire to score points (and ratings). It’s obscene if you think about it. We have a tally sheet in our minds. After every tragedy, the usual suspects parade across our TV screens and social media making bad faith arguments about which side is responsible (and which side is on the side of righteousness). Let’s see. What is the score now? Republicans “won” the congressional softball shooting, but they lost the Buffalo shooting. Democrats lost Waukesha, but they won Charlottesville. The biggest tragedy of the 2017 Las Vegas shooting is that we still don’t know the shooter’s motivation. Who gets to “win” that shooting? It’s all so nihilistic and cynical. I refuse to play. Hate Tucker Carlson or Rachel Maddow if you want. Identify half of your fellow citizens with an act of demonic evil if you want, but just know that as you do, you are beclowning yourself and making everything worse.

This post isn’t about assigning blame for Buffalo. That’s a distraction and a trap, but it is worth carefully considering some of the ideas that seem to consistently motivate these types of violent acts. Much has been made of the shooter’s espousal of the great replacement theory. This is a racist conspiracy theory that majority white populations in Europe and North America will be overrun, replaced, and perhaps even eliminated by darker skinned minorities. Unchecked immigration, disproportionate birthrates, and the influence of cultural elites (especially Jews) are encouraging this replacement which must be resisted and fought. I’m hopeful that anyone reading my blog would find such a conspiracy theory to be vile, but this conspiracy theory is nourished by three very toxic ideas which demand our attention. We may not be tempted to engage in actual acts of violence, but these hollow and deceptive philosophies can absolutely take us captive if we are not on our guard.

If you dig very deeply into acts of racial hatred like the one in Buffalo, eventually you will see each of these three ideas. I can’t help but notice that many of the responses to Buffalo have also engaged in these exact same ways of thinking. One man’s violent “othering” of a group of people is met with paranoia, essentialism, and a callous disregard for mutual understanding. These ideas are evil. I believe that they are actually demonic. They are certainly contrary to the gospel of Christ. Racial divisions and hurt in our land are real and urgent. Rather than keeping score and playing the game of winners and losers, my humble suggestion is this: Grieve with those who grieve and be wise. Whenever you hear anyone talking about race – whether they are on the political right or the political left – carefully listen for traces of these three toxic ideas. Wherever and whenever you hear these ideas, rebuke them for the hollow and deceptive philosophies that they are, and do not be carried away by them.

*There were actually several mass shootings over the weekend including a shooting at Millennium Park in downtown Chicago and at a Taiwanese church in California. It’s a sad state of affairs when you reference a mass shooting but must clarify which one.