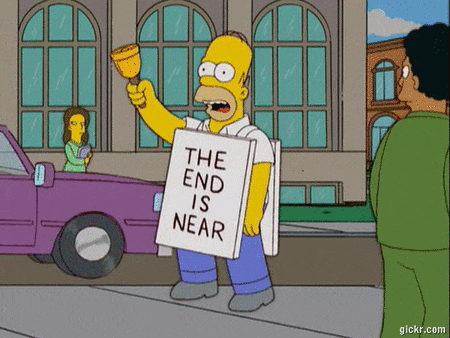 I’ve got a lot of feelings about the sandwich-board preacher guy. Most of them negative. You’ve seen him I’m sure on your college campus, megaphone in hand yelling not-so-nice things about immorality and the coming judgment at the coeds and frat boys passing by. Or you’ve seen him standing on street corners 10-pound Bible in one hand and a placard summarizing his eschatology (and usually his politics) in the other. Rarely is he preaching a message that “God loves you so much he died for you.” Usually it’s something ominous and foreboding from those obscure parts of the Bible that few of us are very familiar with. “A little dash of Ezekiel as they’re heading home from work will really give ’em something to think about.”

But. There is most certainly an apocalyptic streak to the Christian faith. Sandwich-board preacher guy is not entirely wrong – at least in principle. Most sandwich-board preacher guys have pretty skewed or under-cooked theology, but Christians in general do believe in judgment, in the second coming, in the realities of heaven and hell, in moral and societal decay, and in the notion that the last days could turn into the Last Day in the blink of an eye.

I guess the problems I have with sandwich-board preacher guy are personal and practical. On the personal level, he’s just embarrassing like that extended relative who shares your last name and is also a noted public nuisance. “Uncle Steve, some of us still have to live in this town!” The practical issue is more troubling. What effect does sandwich-board preacher guy have on a person’s ability or willingness to respond to the gospel? I’ve heard some of these preachers proclaim a gospel of forgiveness and grace, but many choose to indulge in apocalyptic without much real hope (which is an apocalyptic that scripture knows nothing about by the way). It would be surprising if such preaching resulted in much more than cynicism. My suspicion is that sandwich-board preacher guy is slightly less effective in real evangelism than clever-church-sign-slogan guy. But the apocalyptic preacher doesn’t much care. He is there to ruffle feathers and announce judgment.

The secular equivalent of the sandwich-board preacher guy is the environihilist. This is a particular type of environmentalist who preaches a message of impending and hopeless environmental doom. The environihilist specializes in over-the-top, predictive prophecy full of apocalyptic imagery. Basically, it’s gonna be mass hysteria! (Put Kirk Cameron in The Day After Tomorrow and you’ve got Left Behind. Add some scripture references and An Inconvenient Truth becomes this book.) The end of life as we know it is always just over the horizon. A good example of this is in a recent New York Magazine article which ominously predicts the earth will be uninhabitable within 100 years. The scientific community has loudly protested this particular display of environihilism, but which article do you think will best capture the collective imagination and cultivate the collective anxiety? I would also ask, cynically, which message sells better to the public? There’s always been money to be made in apocalypticism.

So what are we to do? At least the sandwich-board preacher guy offered a call to repentance. “Turn or burn.” The environihilist also has a turn or burn message, but like all systems built on legalistic acts of righteousness, the message of the environihilist falls woefully short of being able to offer true salvation. The acts of righteousness for the environihilist amount to little more than symbolic acts of comparative virtue. Despite the international embarrassment of President Trump pulling out of the Paris Climate Accord many (including Vox) have acknowledged that it is little more than an expensive act of symbolism which really wouldn’t reverse climate change. In the secular apocalypse, we are left to save ourselves, and there is the growing suspicion that we may lack the capacity to be our own saviors.

It was recently reported that many of our environmental acts of righteousness are basically symbolic when it comes to reducing our carbon footprint (the mark of true sanctification in the environmental movement). Well, everything except the rather macabre suggestion of reducing your number of children by one. 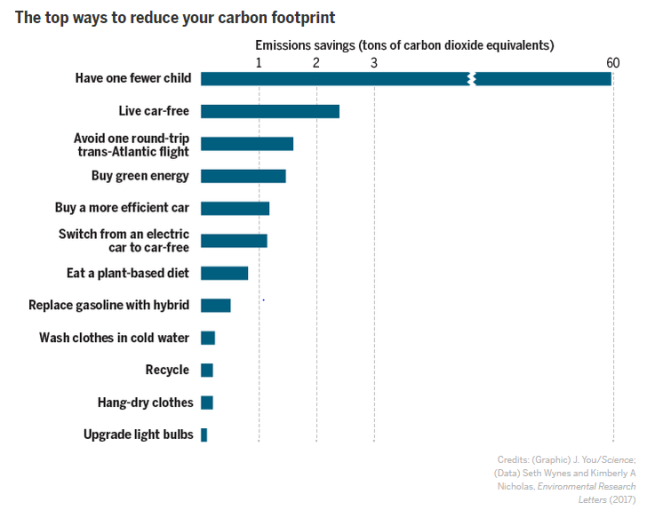 What a conundrum! How are we supposed to save the world for the next generation when the next generation is precisely what is killing the world?! What are we to do? We could all take our cues from this woman and not punish the world with our spawn. Maybe we need to rethink kids altogether. Even Bill Nye the “science” guy – who once entertained children by the millions with his harmless Saturday morning television show – has now thought openly about whether all nations should follow China’s lead and penalize families for having too many children. These heroes are the Essenes of the secular apocalypse. You know that environihilism is taking root when even the idea of having children becomes deeply problematic. Children have always represented hope, but to the environihilist they represent despair.

Of course, most people resist giving in to despair. Instead, they respond to the environihilist in the same way that most respond to the sandwich-board preacher guy – with cynicism. And why not be cynical? Is it any more absurd when Ceflo Dollar flies around on his private jet than when Leonardo DiCaprio flies in his private jet to receive an environmental award.

And that’s a shame because like the sandwich-board preacher guy, the environihilist is not entirely wrong. The environment really does need our attention and care. Environihilism is ultimately counter-productive in the same way that the sandwich-board preacher guy is counter-productive. Really the only result of cynicism and despair is apathy. I’m not going to wade into the man-made climate change debate because frankly I don’t know the science well enough. It does seem that the climate is changing. It also seems foolish to just dismiss the input of experts in the field. But I’ve also read arguments on the other side as well that make some sense. The whole debate is too politicized at this point for the truth to clearly be heard. But climate change aside, there should be no debate whatsoever that we all should work to care for, nourish, and clean the physical environments in which we live – especially for Christians.

As a Christian, there are two reasons why caring for the environment is an urgent concern. Jesus said that the two greatest commands are to love God and to love others. We care for the environment, then, in obedience to those two commands. Creation was pronounced good by God who then gave stewardship over that creation to mankind who was made in his image. Caring for and creating within creation without abusing it is an act of obedience and even worship. When you are caring for that which has been called “good” you are demonstrating that you honor and believe its Creator. Those who abuse what God calls good are not loving God rightly. Secondly, it seems obvious that caring for the environment is a way to love our neighbor whom we share this world with. If I threw all of my trash on my neighbor’s lawn, that wouldn’t be very loving. Taking care of the environment is one (certainly not the only) way to love and take care of my neighbor. So for a Christian environmental care is not primarily about the environment. It is also not about “saving the planet.” For a Christian, caring for creation is an act of obedience and worship until the end does come and God makes all things new in a new heaven and a new earth. Maranatha.

One thought on “the new prophets of doom”