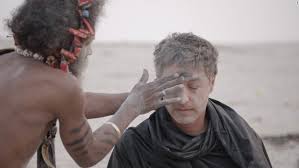 In a bizarre mash up of “The Walking Dead” and “Diners, Drive-Ins, and Dives” CNN, always looking for new ways to cement itself as the Most Trusted Name in News decided to film and air one of its on-air personalities eating human brains.

This is what life looks like at the intersection of the “golden age” of television, the clown college age of journalism, and the bread and circuses age of western morality.

Yes, in the first, desperate episode of “Believer” on CNN, creative-writing expert (turned “religious scholar” by the magical powers of cable “news”) Reza Aslan ingests human brains. Now, in his defense, he’s not an animal. The brains were cooked – apparently overcooked according to his facebook page. (It’s so hard to find a chef who really knows how to properly prepare a medium-well cerebral cortex. Should’ve called this guy.)

So, this is Trump’s America. We eat brains now. Everything’s fine. Poor CNN so desperate for ratings has to turn one of its people into a cannibal for ratings.

It might be good to think about how we got here. How does one become a cannibal? Because when it comes to the diversity of human choices, unless you are a starving soccer player or a freezing pioneer, the choice to go ahead and sample human flesh is pretty outrageous – even by 2017 standards.

Cultural relativism is the position that all judgments are culturally laden. You cannot critically assess any culture in a disinterested, objective way. To judge one culture as “right” and another as “wrong” assumes an unjustified status for yourself – a view from nowhere. You can’t definitively say that any culture is better or worse. You can only say that a culture is different than your own.

There are elements of cultural relativism that seem right to me. It is obvious that we do see the world through our own cultural lens. It is also obvious that quite often we judge cultures based on their lack of conformity to our own cultural norms and imagine that we are instead judging them according to some universal, objective standard. When it comes to other cultures, we do well to listen well before we instruct or judge.

But there are some serious problems with cultural relativism as a worldview (beyond the obvious fact that cultural relativism is itself a “view from nowhere”). The biggest problem that I see is that cultural relativism requires that you cease and desist from making any value/moral judgments on the actions taken by people within other cultures. Everything simply becomes a legitimate cultural expression for one group or another. This is in part what is fueling the strange tendency for western, radical feminists to take on the hijab (while at the same time wearing pink hats meant to represent a woman’s genitalia – you know, just like Susan B. Anthony envisioned). You would think that feminists would be insulted by anyone forcing a woman to cover her head, but through the lens of cultural relativism the hijab isn’t a tool of repression. It is simply a cultural expression that westerners are wrong to judge as repressive.

Once you’ve adopted cultural relativism you must then change the way that you look at religion. I’ll let Mr. Aslan explain his view of religion in his own words.

“Although we’re all speaking different languages, we’re all saying pretty much the same thing.”

One has to wonder where Aslan gets his certainty in making statements like this. It seems like he has himself become enlightened and has a view from nowhere. But notice his assumptions. Religion is subjective (it’s about who you are – not about who God is, silly). Religion is also more about our identity and culture than it is about dogma and belief. Statements of faith only serve to distract us from the ultimate reality that religion is simply another expression of our culture.

But when religion becomes merely another thing that informs your identity it also is stripped of any true significance or content. Secularism has turned religion into a hobby based on personal likes and preferences. “I’m a white male who lives in Missouri, cheers for Chicago sports teams, likes to play the piano and golf. And, oh by the way, I also go to church on Sundays.” Religion in this world is tolerated as long as a person doesn’t have the audacity to actually believe that her beliefs are true in any universal or exclusive way. Aslan is certainly not alone in this assumption about religion. In fact, this may be the view of a very large number of people in church this week. But that fact doesn’t make it proper or correct.

Aslan believes that religions are just different ways of talking about the same thing. When this flattened view of religion is mixed with a healthy dose of cultural relativism, you are forced into the incoherent and ultimately untenable position that says because all religions are saying basically the same things anyway, we must treat them with the same level of tolerance, appreciation, (or dismissal).

Step 3: Replace the sacred “no” with the curious “yes.”

But we’re still a long way from cannibalism. Cultural relativism is all find and dandy until we come up against the firewall of “thou shouldst probably not consume HUMAN BRAINS.” You would think that a plate full of charred brains would be enough to challenge your relativistic assumptions. But not for Aslan. Why?

There is another critical step here. It involves the profaning of everything sacred. Secularism as it is practiced today has disenchanted the world. There are no longer any sacred taboos other than to believe in the existence of sacred taboos. “You believe in committed marriage for a lifetime? How quaint.” “You believe that sex should be reserved for marriage between a man and a woman? Burn the witch!!”

But now the sacred has been profaned. And it’s human nature. When taboos are removed, curiosity takes over. “We’ve always been told, ‘no.’ But I wonder what it would actually be like.” When nothing is sacred, there is also no shame in a culture – except for the shame that comes when someone dares try to shame someone else’s choices. Think about it. Laws could be put into place to “shame” bad behavior, but more and more, our laws are being interpreted to shame those who would want to put any limits on behavior.

It’s both funny and sad that Aslan has received the most criticism for portraying Hinduism in a bad light rather than for the fact that, you know, HE ATE HUMAN BRAINS. There is not angst about the profaning of the sacred. Instead, the fear is that in portraying the worst example of a break-away sect of Hinduism, people might come to negative conclusions that would challenge the assumptions of cultural relativism.

This step isn’t necessary, but it sure helps. Something like this would never have been aired if it wasn’t for the need to attract more and more viewers and thus more and more dollars.

When the sacred has been replaced with curiosity and religion has been replaced with culture and this is combined with the American appetite for entertainment, you get a culture that knows how to be breathless but has forgotten how to be serious. We must be entertained. We must be captivated. And in our callousness, only something like eating human brains has the power to really capture our attention – at least for a few seconds until our Twitter timeline refreshes.